A Ride on the Switchback 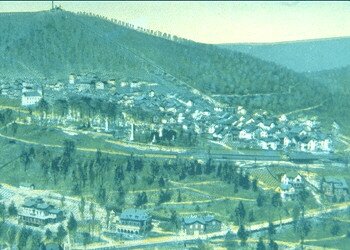 Late Nineteenth Century visitors to Mauch Chunk frequently arrived by train, approaching the town from the Narrows, a gorge that strongly suggests the area's pseudonym, The Switzerland of America. O. S. Senter wrote in 1873, "Here we have at a single glance a view of the town, the coal shoots, the 'Switchback,' the winding bounding river, with its locks, falls and rapids, and above all the grand old mountain summits, which rise up skyward, and towering towards the vast blue vault of the heavens, seem to rest against and support its mighty dome like the pillars of time; and as the wind and storm sweep across the topmost peaks, their trees wave among the clouds like the dark locks of giant forms. Away up yonder sits Pisgah, in majestic simplicity, like a monarch enthroned, ruling among his fellows with power and might supreme."

Crossing the river on a footbridge to the outside of the railroad curve around Bear Mountain, Mauch Chunk's indian namesake, we can get a comfortable supper or a room at Mr. Booth's Mansion House. But anxious, as described by another 1870s writer, "Leaving the Mansion House we walk up Susquehanna street along the Lehigh river, till we pass the Court House, where a road leads up the side of the mountain to Upper Mauch Chunk. On our Way we pass the handsome residences and grounds of Hon. Asa Packer on our left, and Hon. John Leisenring on our right. Further up the hill we have a good view of the inclined planes and the shutes by which the coal is lowered from the top of the mountain to the river below, and there separated into the different sizes of nut, stove, egg, broken &c., and finally deposited in cars or boats ready for shipment to market."