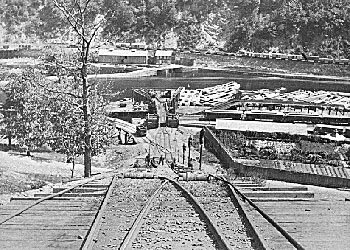 There is a gritty, industrial side to the history of the gravity railroad and this site. Before construction of the depot and the arrival of Victorian tourists, locals called this area "The Shutes." Tons of anthracite coal from Summit Hill mines roared down several wooden chutes into arks floating below. Designed by Lehigh Canal co-founder and creative genius Josiah White, the facilities here included a turntable that directed railroad cars to and from the main track. Below, a large hopper first caught the cascading coal, sorted it by size, and then released it into an ark for a trip to market by water.

But, by the end of the Nineteenth Century, thousands of excited tourists embark from this spot on a scenic, stomach-churning 18-mile ride on the Switchback Railroad. Passengers ride from here up to Summit Hill along the Back Track, then return along the independent route called the Down Track. 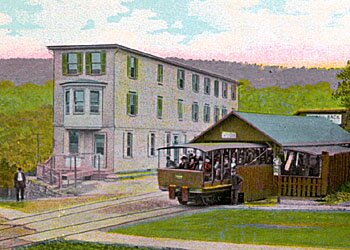 After traveling to Mauch Chunk on the Lehigh Valley or New Jersey Central Railroads and detraining at stations near the river, passengers arrive at this site on foot, by stage coach, or, after 1893, by trolley. A 125 foot long depot, built on this site in 1872, welcomes them. The depot, with ticket office and waiting pavilion, will survive for 60 years. When the railroad is scrapped, the depot will go with it.

Here, we quickly board our car to get front or side seats, the best for the views to come. Cars can be boarded under the main depot roof or under the adjacent shed, which is used only on Sundays and holidays to accomodate the heavier traffic. Cars operate generally from mid-May to Halloween, leaving the depot about once an hour beginning at 8:30 am and ending at 6:30 pm. Occasionally, there are special trips "by moonlight."

We are warned to be seated by a signal from a ship's bell mounted in the car. The brakes are released, and the car, powered only by gravity, drifts down a very slight grade that leads to the base of Mt. Pisgah.